Mathematics;the past, present, and the future

MATHEMATICS: THE PAST, PRESENT AND FUTURE

Mathematics did not just start in 1801 but right from the very beginning when God created the universe and carried out a re-engineering process for the earth to be Mathematically BALANCED. One of the things that made creation possible was God’s ability to decipher with all level of consciousness, the principles of Mathematics.

In the beginning, God made man in His own likeness and image. He put things into order and BALANCE. There was an an equal distribution of wealth and resources throughout the universe. He created man as the BALANCE of nature and the caretaker of everything He created. There were beautiful things, so also the ugly, good people and bad people, positive and negative aspects of life. Man as an image of God also tried to put things into BALANCE. That is one of the greatest roles of Mathematics in our society and environment – to BALANCE.

Mathematics is in principle inexpensive. It is one of the core subjects offered by students and by virtue of it relevance, it is a pre-requisite at any level of education and its criteria for success is by and large universally accepted. This makes Mathematics an attractive “investment”. Moreover, a Mathematical result is valid forever. It may fall out of fashion, or fall outside the current area of application but cannot be invalid. Even the oldest known Mathematical formulae such as that for solving quadratic equations known 2400years ago by the Babylonians, Chinese and later the Greeks before being crystallized into its present form in 1100AD by a Hindu Mathematician called Baskhara, are the bread and butter of present day elementary Mathematics. avast password activation code 2017

Recently, I was so opportuned to join a humble Professor of Education in her car, along Abak road in Uyo, Akwa Ibom State, Nigeria. It happened that we caught up with a hold-up, not too long and I quickly noticed, with all level of consciousness that the main reason for the hold-up was a driver’s inability to turn at the U-turn at once. He needed to reverse several times so as to now turn properly. Is it that the person wouldn’t have made it the first time? Yes! He would. You can always avoid a second time problem with the help of Mathematics. Everything we do in life must be well calculated else we face failure, dissatisfaction, unplanned and unprecedented results.

In our everyday life, Mathematics blends with our mind and activities. Mathematics is a powerful thing that spices up our life. It is simply the powerful spice that thrills and tricks human beings. Mathematics allows you to enjoy the wonderful world of imagination, critical thinking and philosophy.

I want you to know that anything imaginable can be formed by the principles of Mathematics:

Q1.   If   , show that this equation can be rearranged Mathematically to give

Research has shown that many top restaurants fail within their first year because of poor Mathematical planning. So, you place your order and the chef gets to work. You’d better hope he has a good grasp of Mathematics, because understanding measurement, ratio and proportion can be the difference between something delicious and something that ends up in the dustbin.

On the 5th of July, 2019 at exactly 4:57pm, I entered a tricycle from Ekom Iman junction through Idoro road to Ikot Ekpene road in Uyo, Akwa Ibom State, Nigeria. After two minutes drive, another handsome young man joined us and said he will pay N70 from where he was to Ikot Ekpene road by Total filling station. The tricycle driver, after much argument decided to accept  N70 instead of N80. At the Total filling station, the handsome young man alighted and gave the driver N100. As there was no N30 to give him as balance, the driver quickly said, ‘do you have N30 to collect N50?’. The young man said, ‘yes’ and did same. After giving him N 50 as balance, the driver said, ‘do you understand?’ The young man nodded his head and said ‘yes’ as he left. Do you know that the handsome young man paid more than the

N70 he took time to argue for? He paid N80. Mathematics is life, so know Mathematics today, for the present and the future.

Then you become a Mathematician. 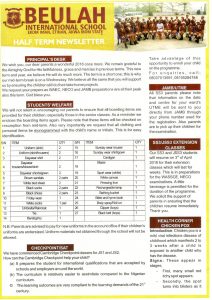